The Diary of Anne Frank

Anne Frank’s dream of becoming famous came true, but not the way she had wanted it. Her diary has been translated into fifty-three languages and has never been out of print ever since its publication in 1947. Anne Frank, her family and four Jewish friends hid from the nazis in the annex behind her father’s office at Prinsengracht in Amsterdam. A revolving bookcase full of company files gave access to the hiding place. 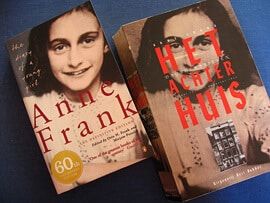 When in hiding, Anne kept a diary which was found after the war and translated into over fifty languages. After having been in hiding for twenty-five months someone tipped them off. No one knows who betrayed them, although it is thought that the informant was a former business associate of Otto Frank, Anne’s father.

Early morning of 4 August 1944 heavy steps reverberated on the staircase. The whole family shrank with fear. An SS officer and Dutch Security Police members arrested the family. The family was put on transport, first to Auschwitz and then to Bergen-Belsen, where Anne died in March 1945, 15 years old. She died from typhus only one week before the German surrender.

The Diary of a Young Girl: The Definitive Edition
Kindle edition
Hardcover edition