Delftware is available all over Amsterdam and the Netherlands, ranging in price from €2 to €20,000. But how do you distinguish genuine from imitation Delft Blue? A visit to Royal Delft – Koninklijke Porceleyne Fles Factory and Showroom in Delft will explain all. Genuine Delftware is stamped with a blue jar as proof of its authenticity. Price is another indication – genuine Delftware does not come cheap.

A visit to Royal Delft – De Porcelyne Fles Factory gives you an insight view of how Delftware is produced. Each piece from a simple wall tile to an elaborate Chinese-style pitcher is meticulously handcrafted and hand painted. During your visit you follow the various steps in producing Delftware. 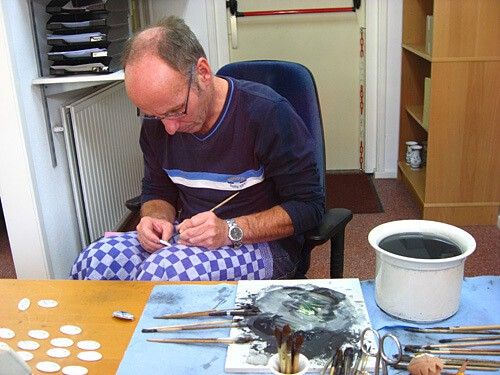 Painter at work in Royal Delft, delftware factory in Delft

Amsterdam-Now tip: Book a Delft Blue & Orange Tour! This tour comprises a walking tour through the picturesque centre of Delft. The highlight of the tour is a visit to Royal Delft Factory, Showroom and Museum, where you can see how Delftware is produced.

Pitchers, vases and bowls are cast in molds whereas plates are shaped by means of a potter’s wheel. When the object is shaped to the desired form it is fired in a kiln for the first time. The result is known as bisquit fired and the object is now ready for being painting. A stencil is applied and rubbed with charcoal powder so that a vague outline of the pattern shows. The painter also has a finished piece before him as a model. He painstakingly decorates the object with black paint that contains cobalt oxide.

Depending on the design and the size of the object, painting can take any time from a few hours to several days. When the work has been completed, the artist signs his creation at the bottom with the logo of the Porceleyne Fles, his own initials, the year code and the serial number. The object is then glazed which gives it an opaque white coating and then fired for a second time. The surface becomes a shiny and non-porous, transparent glaze. A chemical reaction changes the black paint into Delft Blue. 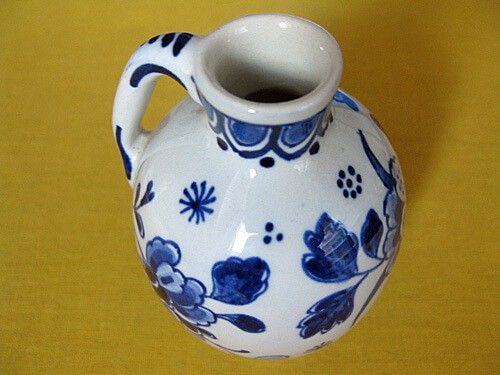 It is no coincidence that Delftware is difficult to distinguish from Ming porcelain. In the seventeenth century de Vereenigde Oostindische Compagnie, the Dutch East India Company, brought Ming porcelain to the Netherlands. Dutch potters captured by its beauty began to copy the objects.

From a distance Delftware cannot be distinguished from Chinese porcelain. On a closer look there is a marked difference; Delftware is noticeably thicker than the delicate Chinese porcelain objects. It also lacks the glowing translucency. This is because the Chinese worked with first quality porcelain clay whereas the Dutch had only greyish-brown earthenware clay at their disposal. The Dutch found a solution to this quality difference. The fired their earthenware unglazed, then hand painted it and covered it with glaze and fired the object for a second time. The result is an amazing imitation of Chinese porcelain but genuine Delftware.

Delft is fifty minutes by train from Amsterdam. There is much else besides the Royal Delft Factory and Showrooms to justify a visit to this picturesque city which inspired many of the works of the Delft born seventeenth-century painter Johannes Vermeer. Stroll along leafy canals lined with canal houses. Delft is very much a miniature version of Amsterdam. You will look in vain for Vermeer paintings in Delft Museums but the city has two first-rate museums – Prinsenhof Museum and Huis Lambert van Meerten Museum, each with an impressive collection of early Delftware. 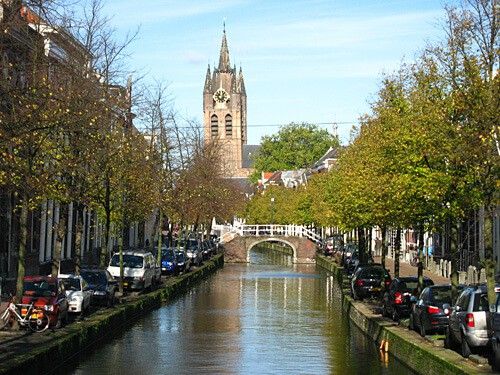