Delftware is synonymous with Holland and ubiquitous in souvenir shops – windmills, clogs, kissing farmer boy and girl, vases, mugs, wall plates – they all sell like hotcakes. All souvenir shops in Amsterdam sell this blue-and-white pottery but did you know that this type of ceramics is not a Dutch invention?

Once upon a time the city of Delft teemed with potteries. Today there is only one left: De Porceleyne Fles. The best way to get acquainted with Delftware and its history is to take a guided tour through the Royal Delft Museum and the Delftware factory. You will also watch Delft Blue painters at work.

If you want to buy the genuine, hand-painted Delftware, the Royal Delft showroom displays its complete collection of handmade and hand-painted Delftware and signed but they come at a steep price. Very attractive for some is the discount counter where you can buy ceramics that are not quite perfect. The defects are often so minor that they are difficult to spot. 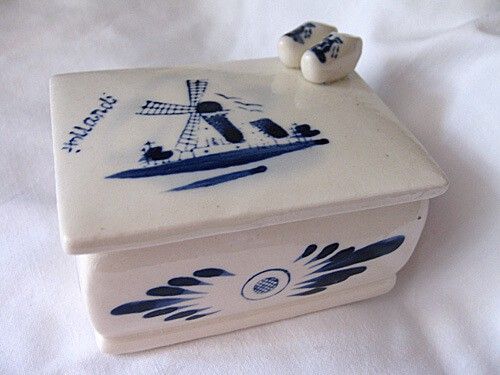 Delfware genuinely made in China – from any souvenirshop in Amsterdam, €3,50 at most

A blue-and-white pepper and salt shaker, a miniature pair of clogs or a cow creamer – tourists love them! Delftware is the number one Dutch souvenir and famous worldwide. But be aware! There is hand painted Delftware and mass produced Delftware marked ‘made in China’ or ‘Taiwan’. The first thing to do is to look at the bottom for identification markings.

Royal Delft – De Porceleyne Fles, a company founded in Delft in 1653, makes ceramics in the traditional way. Every article of Royal Delft is painted by hand and can be identified by certain symbols: a pharmacy bottle and intertwined initials JT of Joost Thooft, the owner of the company in 1876. Underneath the bottle the word ‘ Delft’ with a flourishing letter D. (Delft and not Delfts – with the letter ‘s’ attached). To the left are the initials of the painter. The letters to the right indicate the year code and at the bottom is the article number.

In the sixteenth century Italian potters settled in Delft where they found the clay soil suitable for making pottery which they glazed with bright metallic oxides, known as majolica. They decorated their ceramics with imitations of frescoes from classical history, the Bible and mythology. Once in Delft, these Italian potters applied themselves to making tiles. When these majolica painters adopted Dutch motifs such as animals and flowers, their trade began to flourish. 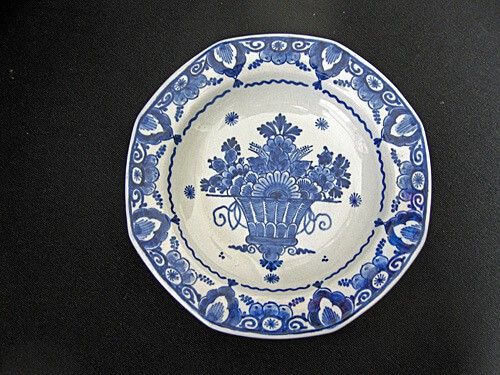 Trade with the East through the East India Company brought Chinese pottery to the Netherlands. When a prolonged civil war in China broke the supply line, Delft potteries took over the luxury side of the market by copying Chinese designs. By the end of the seventeenth century, Delft was churning out blue-and-white ceramics decorated with Chinese designs and exported them back to China. Over the times the pattern changed and also depicted traditional Dutch landscapes, animals and flowers. In the early eighteenth century Delft craftsmen created ceramics in polychrome as well as in blue and-white.

The painter starts his work on a biscuit fired piece of pottery. This is the stage after a first firing before glazing. The artist then applies a stencil which he rubs with charcoal powder to get a rough outline of the decoration. He then uses black paint containing cobalt oxide and with a sable-haired pencil he decorates the object. This is a very delicate job. As the biscuit fired objects are porous, the paint is absorbed immediately and mistakes cannot be corrected. When the piece of pottery is fired for a second time a chemical reaction changes the black paint into the famous Delft Blue.

Delft potters conquered the world with their imitation of Chinese porcelain. The irony is that today the Dutch blue-and-white ceramics are now profusely copied in China and then exported to Holland.