Many people refer to Amsterdam as the Venice of the North, a pertinent name for a city with two hundred canals. Few people know Amsterdam’s second name, Mokum, Yiddish for place or town. Mokum is an appropriate name, because the city has welcomed Jews ever since the 16th century. Yet, life was full of hardships for the new immigrants who had to buy citizenship. They were not allowed to marry outside their circle because Jewish-Christian marriages were illegal in Protestant Amsterdam, nor did they have religious freedom. The Reformation forced Jews, but also Catholics to practice their religion in secret.

The 16th century saw an influx of Sephardic Jews, refugees from Spain, the Middle East and North Africa. The 17th century brought the Ashkenazi Jews from Germany and Poland. Unlike in other European cities, Jews in Amsterdam did not live in ghettos. The majority of them settled in and around what is now Waterlooplein and spread out to the Nieuwmarkt area. The two groups did not mix and even today they worship in separate synagogues. 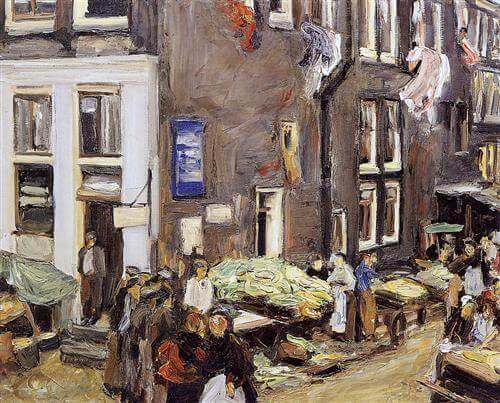 Although relatively free from persecution, life for Jewish immigrants was not easy in Amsterdam. Trade guilds controlled most commercial activities and Jews were not allowed to become members. Sephardic Jews were fortunate. Many of them were diamond cutters for which there was no guild. That’s why today Amsterdam is still an important diamond centre. Others worked in retail: street markets, finance, medicine and the clothing industry; all trades without guilds. However, the majority was less successful, yet managed to scrape by on little money.

In Napoleonic times, discriminatory restrictions on Jews and Catholics were abolished. Jews, Catholics and Protestants lived peacefully together until the beginning of World War II. In 1940, most of the approximately 130,000 Jews living in the Netherlands were rounded up and deported to Auschwitz, Bergen-Belsen and Sobibor. On 9th October, 1942 Anne Frank wrote in her diary, “The British radio speaks of their being gassed.” Only 5,500 survived the war, a tragedy whose effect can still be felt today. Presently, around 20,000 Jews live in the city, many of them in the Buitenveldert region and in the neighbouring town of Amstelveen.

When you walk through Amsterdam, the Jewish heritage is apparent. Bijenkorf, De Bonneterie and Metz department stores all had Jewish founders. Only Bijenkorf is still trading, the other two have disappeared. Tuschinski cinema, the Diamond Exchange and the Gassan Diamond Factory are examples of continued Jewish involvement.

1. The Jewish Historical Museum housed in Europe’s largest synagogue complex displays examples of religious objects. Temporary exhibitions and the Museum for Children show the many aspects of Jewish life.

2. Anne Frank House, the canal house museum where the Frank family was in hiding for two years and where Anne Frank wrote her diary.

3. Portuguese-Israelite Synagogue, Europe’s largest synagogue when built in the 17th century. The soaring interior with massive pillars cannot but impress. Although nowhere near its pre-World War II numbers the Jewish population in Amsterdam still represents an important part of the city’s culture. The Holocaust deeply affected the Jewish community, but many have managed to rebuild their lives.