When in the Jordaan neighbourhood, be sure to step into Monte Pelmo Ice Cream Parlour for the most authentic Italian ice cream in Amsterdam. Since 1957 Monte Pelmo has been making the most delicious ice creams in all Amsterdam. Listen to Fred, the singing ice cream vendor, and if this doesn’t make your mouth water … 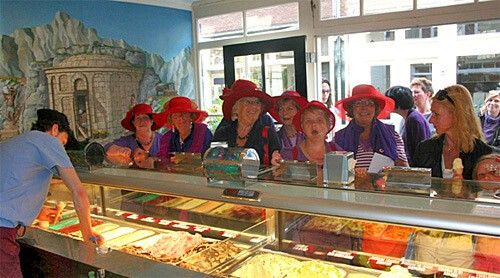 Fred – the ice cream maker, the singing ice cream vendor from the Jordaan neighbourhood. In the old fdays many Italian immigrant workers settled in Amsterdam and …. without Italian ice cream their life was misery. Fred’s ice cream cart could be found in almost any open air market in Amsterdam. Together with his ice cream-loving customers Fred was singing the most beautiful and melodious songs while selling ice cream. He was such a talented singer that he won several song contests. His greatest hit was: ‘Gelati, ik heb lekkere gelati (Ice cream, I have delicious ice cream)

Monte Pelmo’s ice cream is still as delicious as then, but there are definitely more flavours than in the old days – traditional flavours such as amaretto, hazelnut, caramel, malaga, mocca, vanilla and stracciatella, but also new flavours; Smurfs, bubblegum and peanut butter. Their low fat sorbet ice cream comes in the flavours blood orange, mango, pear and apple-kiwi. With so many flavours it is almost impossible to decide. The solution is to come again and again until you have tasted all.