Van Gogh Museum in Amsterdam houses the art collection of Theo van Gogh, Vincent’s younger brother and art collector. The collection consists of 200 paintings and 500 drawings by Vincent and works of Toulouse-Lautrec, Gauguin, Monet and other contemporaries. Van Gogh Museum shows the majority of Vincent van Gogh’s works. The Museum spreads across four floors and exhibits some hundred paintings by Van Gogh among them The Yellow House, The Bedroom and Almond Blossom. Add to this works of contemporaries such as Toulouse-Lautrec, Gauguin, Monet, Rodin and Pissarro who influenced van Gogh’s style and the result is a fascinating exposition.

The Van Gogh Museum is popular! That’s why it is advisable to book your tickets in advance online and enjoy fast-track entry. Select a day and time slot. There is no time limit to your visit so you can stay as long as you like.

3. The multimedia audio guide is your tool to truly understand the artist’s works and what motivated him. The multimedia guide is available in 11 languages: English, Dutch, French, German, Italian, Portuguese, Spanish, Russian, Mandarin, Japanese and Korean.

Before entering the museum proper visitors see a large screen with stills from Lust for Life, a film about Vincent van Gogh shot in 1956. Next there is a large gallery with Van Gogh’s self-portraits and his only surviving palette with paint still thick, ready for use.

His works are displayed in chronological order showing Van Gogh’s work alongside works of nineteenth and twentieth-century artists who influenced and inspired him. 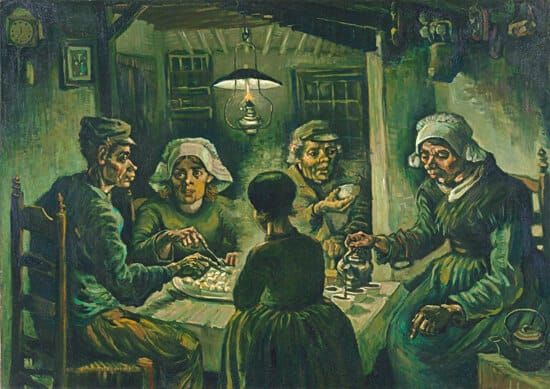 Van Gogh’s early works depict gnarled peasants and brown-grey still lifes. They are dark and somber; the main colours are black, brown and beige. These works show the hard life of farmers tilling the soil. Without doubt, the Potato Eaters is the most famous work of this period.

In 1886, Van Gogh moved to Paris. Influenced by the impressionists there, he discovered colour. During this period he painted urban landscapes and self-portraits: Paris roof tops and domes that glow under blue skies, and some self-portraits: beardless, freckled face with a mop of red hair covered by a straw or felt hat.

Two years later he moved to Arles, a small town in southern France. He rented four rooms in a building he would paint and is now known as the Yellow House. The lucid Mediterranean light heightened his love for colour, especially yellow. A prime example of this period is The Bedroom in Arles. He was so smitten with this picture that he painted it twice. It was also in Arles that he began his sunflower series using vivid orange and deep ochre. He enriched the flowers with broad streaks of bright vermillion and mauve. 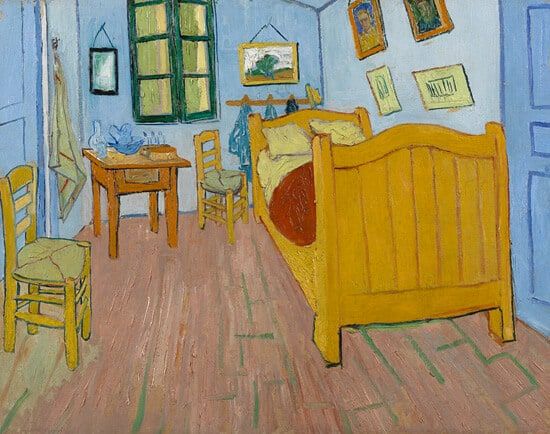 The Museum possesses only few works from this period because most of them are in Musée d’Orsay in Paris. One of Van Gogh’s last works was Wheatfield with Crows. Swirling fields, ominous skies and menacing crows show Van Gogh’s deteriorating mental state.

Vincent van Gogh was born in 1853 in Zundert, the Netherlands. At twenty-four, he went to Amsterdam to study theology, but he was not the studious type. Van Gogh wandered around the city and paid frequent visits to the newly built Rijksmuseum and studied Rembrandt’s works in particular. He began painting in 1880, studied at Antwerp Art Academy for a brief period, but was mainly self-taught.

In 1885, he moved to Paris and two years later he settled in Arles. After a fierce argument with Gauguin, Vincent cut off his own ear. To be more precise, it was the lobe of his left ear. He wrapped it in a cloth and gave it to a prostitute and told her to guard this object carefully. After trying to drink turpentine in his studio, he was sent to an asylum. A precise diagnosis of his illness is not available but he was treated for acute mania and epilepsy.

Deeply depressed and utterly lonely, Vincent shot himself in the chest on 27 July 1890. He lived for another two days. When asked why he had injured himself, Van Gogh replied, I’m free to do what I like with my own life.

The Van Gogh Museum is located in the Museum Quarter of Amsterdam, close to the Modern Art Museum and the Rijksmuseum. The museum is accessible by tram 2 or 12. Underneath Museumplein is Q-Park, parking garage. Parking in the streets is quite expensive. You will be using the digital parking system.