Oosterpark is a favourite picnic spot at weekends. It is also popular with cyclist and walkers. The park abounds in statues of which the Slavery Monument is the most famous. Oosterpark is located just outside Amsterdam centre but still close enough to go there for a stroll. The park was designed in English garden style. As Oosterpark was laid out at the end of the nineteenth century the trees are now fully grown and the park is very rural. 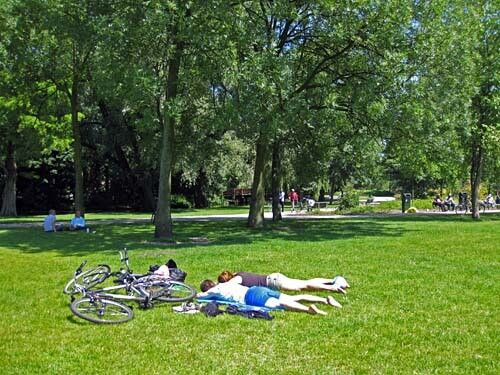 A Summer’s Day in Oosterpark

Age-old trees, picnic meadows and ponds with swans and ducks and statues dotted all over – Oosterpark in a nutshell. Go for a brisk walk, a bike ride or put on your inline skates. Oosterpark is the perfect place to laze away an afternoon while the children are playing on the swings and glides in the playground.

Birdwatcher can spot grey herons and green parrots. The parrots are not endemic but they live in many Amsterdam parks. The story goes that one day someone set free a couple of green parrots and since then they have multiplied. The park was laid out at the end of the nineteenth century as a park for the people. That is what it is until today: a park for everyone.

The most important statue in Oosterpark is the Slavery Monument designed by Suriname artist Erwin de Vries. It consists of three parts – the past – the present – the future – and commemorates the abolition of Slavery in the Netherlands in 1863. Queen Beatrix, now (after her abdication) Princess Beatrix, she unveiled this monument in 2002 in the presence of only a handful of dignitaries. The public were kept at bay which caused considerable frustration among Dutch people from the Antilles and Suriname. Every year on 1 June a commemoration wreath-laying ceremony is held in front of the monument. Everyone is welcome! 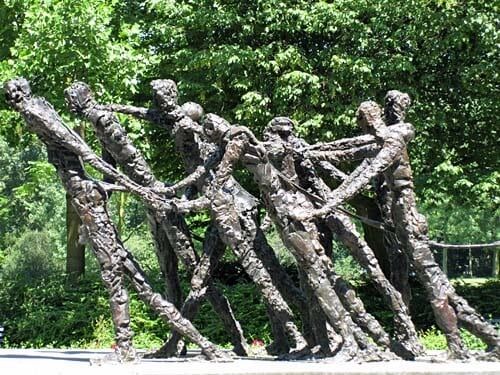