Golden bend – Gouden Bocht – that is where the most coveted canal houses in Amsterdam. All these mansions clustered around the curve of Herengracht between Spiegelstraat and Vijzelstraat. This is the stretch of the canal where, in the 17th century, wealthy merchants built their lavish homes. Today, the mansions on the Golden Bend are no longer privately owned but are now banks, offices and companies.

Late 16th and early 17th century Amsterdam prospered as an ever-increasing number of people settled in the city. To solve the housing shortage, Amsterdam embarked on the canal belt project. Herengracht, Keizersgracht and Prinsengracht were dug, three canals encircling the old city centre. To provide homes for as many people as possible plots were limited in size, 9 m (30 ft) wide and 54 m (190 ft) deep, of which 25 m (82ft) was reserved for the (compulsory) garden. These newly built canal houses solved the housing problem temporarily and brought in revenue. Residents were taxed according to the width of their homes. 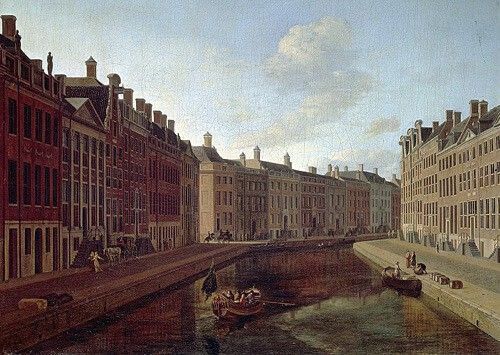 Affluent and privileged Amsterdammers interpreted the regulations creatively. They bought two adjacent plots, building one house with two fronts or converting two houses into one with two front doors. A common feature for all these canal houses is the double staircase that leads up to the main entrance. Underneath the steps is a small door for the servants as they were not supposed to use the grand entry. Inspired by ancient Greece, the mansions are adorned with pediments, columns, pilasters and decorated with vases, busts, marble scrolls and busts.

The Golden Bend overlooks an array of double-fronted mansions whose façades hint at the wealth inside. Today, many of these opulent canal houses have been converted into apartments, are museums or used as offices. Herengracht 475: extravagantly decorated with allegorical figures and surmounted by a slender balustrade. Herengracht 493: double fronted mansion with a double staircase and a lavishly carved pediment. Three mansions on Herengracht are home to museums: # 573: Museum of Bags and Purses # 597: Kattenkabinet # 672: Museum Van Loon # 605: Museum Willet-Holthuysen.