Skinny Bridge is one of the 1,200 bridges that span the canals that crisscross Amsterdam. Some are simply a means to cross the water, others are picturesque or true feats of engineering. Many are illuminated at night and offer a romantic backdrop. Magere Brug or Skinny Bridge is probably the most famous and certainly the most photographed bridge in Amsterdam. All Amsterdam bridges are numbered; Skinny Bridge is number 242. 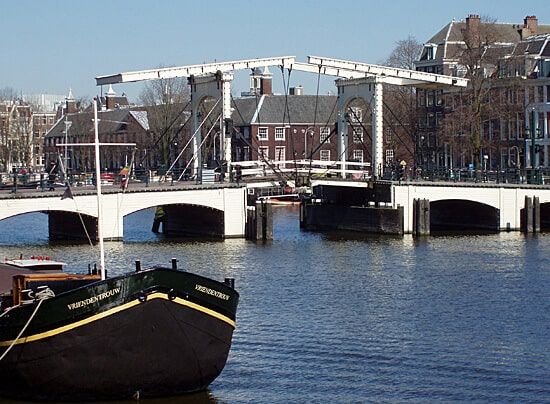 Magere Brug, or skinny bridge is a drawbridge that connects Kerkstraat and Nieuwe Kerkstraat. It is one of the oldest bridges in Amsterdam and was hand-operated until recently. However, the collective labour agreement for bridge keepers decided that pulling up the bridge was too heavy for one man. It is now computer operated. Today’s bridge is a replica of the seventeenth-century bridge. Even if you have never been to Amsterdam before, the bridge may look familiar to you because it featured in the James Bond film, Diamonds are Forever. At night the bridge is decorated with 1,200 light bulbs; an enchanting sight.

A bridge has spanned this stretch of the river since 17th century. Legend has it that a footbridge was built for two sisters, each living on one side of the river. The bridge made it easier for them to visit each other. Another story tells that the sisters needed a bridge to get to their carriage and horses stabled across the water. Their family name was Mager, hence Magere Brug. Mager translates as skinny. It is much more likely that the bridge got its name because it was so narrow that it was almost impossible for two persons to pass each other. In 1772, the bridge was widened to a double bridge. The present Magere Brug is a copy and was built in 1929.