Hofjes are courtyards ringed by social housing meant for mainly elderly women who were often widowed and had no means of income. Hofjes were funded by wealthy Amsterdam merchants. These courtyards feature well-tended gardens with flowering shrubs, trees and colourful flowers in spring and summer. Amsterdam has a large number of hofjes tucked away behind the facades of canal houses. Entrance is usually by an unobtrusive door. Open it and you enter a world of peace and quiet.

Hofjes are quiet places with lovely gardens and worth a peep. Many hofjes are on or near Prinsengracht. Entrance doors seem to be shut, simply push them open and enter into a silent and serene world.

is at Prinsengracht 159-171. It is also known as De Arcke Noach and was founded in 1765. In this hofje lived mainly protestant women of fifty and over. The houses in this hofje are more luxurious than in other hofjes as here the cottages have two floors.

is at Lindengracht 149-163. It was inhabited by Protestant widows of 50 years and older. They had to live according to the rules and regulations of this hofje which meant that they had to hand in their personal possessions. They had to obey rules; when to get up in the morning, when to pray and when to receive visitors. These women often had no other choice as they were poor and had no profession and no money.

is at 1ste Egelantiersdwarsstraat 1-5. This hofje is two joint hofjes and founded by Claes Claesz, a draper merchant in seventeen-century Amsterdam. As with most hofjes it is no longer old widows of simple means who live here. Today’s tenants are artists and students. 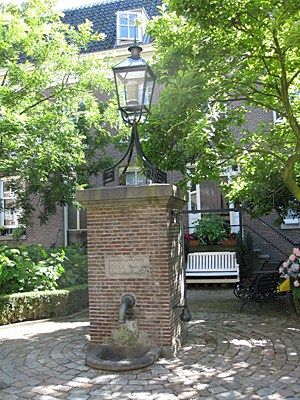 The waterpump is only for decoration

The waterpump in the courtyard is no longer in use and the privy has long since gone. All hofjes are sought after places to live. Small oases of peace in the centre of bustling Amsterdam. Feel free to wonder around, but bear in mind that the hofje gardens are privately owned.