Madurodam in the Hague

Madurodam is a miniature city that allows you to see the Netherlands in one afternoon. A walk through this small town leads you not only past the most important monuments of Amsterdam and other cities in the Netherlands but also takes you the bulb fields and polders. Madurodam is in The Hague, Holland’s third largest city and 50 km south of Amsterdam. 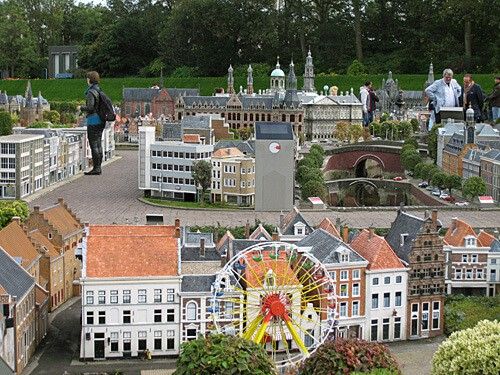 Madurodam is Holland’s smallest city. You will find here houses, apartments and farmsteads. In summer the inhabitants will go to the beach or visit the Zoo. Over 4,000 cars and lorries travel on eight motorways. The city prides itself in ten museums, five train stations, four churches, three theatres, twenty-seven bridges, one post office, fifty-eight ships, one airport, 3,150 lamp posts and 30,000 flower bulbs, mainly tulips. Madurodam offers a variety of architectural styles, from Gothic St. Jan Basilica to futuristic bridge dwellings. The tallest building is 25 m (82 ft) high and houses the Rotterdam Insurance Company. The all-glass façade looks stunning, but must be a window cleaner’s nightmare!

Clogs in the City

On the outskirts of the city, you will find the klompenfabriek, a clogs factory. Fifty years ago clog making thrived in the Netherlands; eleven hundred wooden shoe makers produced 4 million pairs annually. Today only fifteen factories remain and turn out 800,000 pairs per year. The Madurodam factory is still in full operation. Insert a euro into the slot machine. A grumble roars inside the building, seconds later a shining pair of clogs bounces onto a conveyer belt, into a lorry which starts moving and stops right in front of you. Bend down and pick up our miniature pair of clogs. 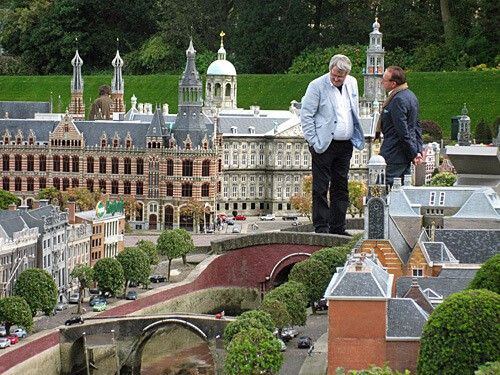 Madurodam Rail is loved by many visitors. Twelve different types of trains cover four kilometers. All trains are hand-made and replicas of Dutch trains. Every six to ten years, engineers renovate the tracks, just as in the real world. Accidents are rare because the Automatic Train Protection System is in force. A train stops automatically when the next stretch has not been cleared. The Nederlandse Spoorwegen, Dutch Rail, uses the same system.

Madurodam is a miniature city. All buildings are on a 1:25 scale. Construction of the buildings and maintaining them is a full time job for thirty-five people. Curaçao-born George Maduro who gave his name to the city died in action during the Second World War. Madurodam was built in his commemoration and is both a war monument and a charity foundation.

The city, founded in 1953, was a joint initiative of Mr and Mrs Maduro and Mrs Boon who supported the Dutch Student Sanatorium. Here students could recover from tuberculosis and at the same time continue their studies. Since this is very costly, funds had to be found. Mrs Boon took the English miniature village in Beaconsfield as a blueprint. High revenues enabled the British owner to make regular donations to London hospitals. I can do the same, she must have thought.

Madurodam finances eighty per cent of the objects. Industries and companies with an affinity to the objects sponsor the remaining twenty. Several airlines have one of their airplanes stationed at the city’s airport, a replica of Schiphol Airport. You will find well-known Dutch retail chains and supermarkets in the shopping street also multinationals have their headquarters in Madurodam.

Sponsored buildings and objects must gain approval before planning permission is granted. A building site must be available. The building must be typically Dutch and attractive for visitors. If the commission approves, construction can start. Once the two parties have signed the contract, the building will remain in the city for five years.

Before construction starts in Madurodam’s own workshops, detailed photos of the original buildings are taken. Originally all buildings were made of wood, but these days synthetic materials are used because they are weather-proof. Smaller buildings take about three months to complete, but larger, more complicated ones can take as long as three to four years. One of these complicated buildings is the Rijksmuseum in Amsterdam. Look through the roof windows and you will see visitors admiring works of art. The scene looks very much like the real thing. 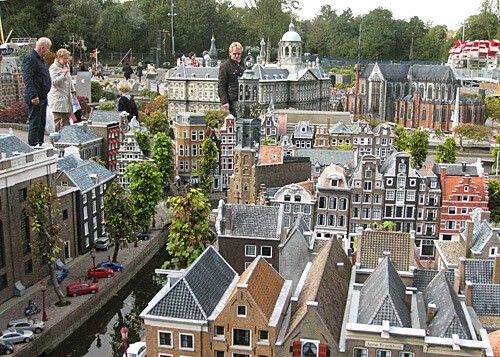 The Madurodam city walk will take about two hours. Follow the white arrows on the paths which means that you will not lose your way and see all sights and buildings.

Amsterdam-Now Tip:
Make the most of your day trip! Soak up Dutch culture and visit The Hague, Delft and the miniature city of Madurodam without hassle! Learn how Delftware gets its sparkling blue colour, see the Houses of Parliament in The Hague and the see the miniature version in Madurodam – an afternoon well spent!

Book the The Hague, Delft, Madurodam trip online and save €6

Public Transport
Train to The Hague Centraal Station (CS) or Hollands Spoor (HS)
Tram 9 to Scheveningen, get off at Madurodam stop, same tram for both stations

Best Time to Visit
Madurodam is open all year round. The most crowded time of year is summer with bus loads of visitors. At sunset, 50,000 light bulbs give the city a magic glow. Winter is equally good, especially when a dusting of snow covers the roofs, parks and streets.